This week I’m going to return to my favorite sample database, Contoso. If you remember, Contoso consists of sales data for a company that produces several different lines of customer electronics, from computers to phones to TVs. The data spans several years of sales. In past examples, I related the FactSales table (the table containing all of the sales records) to several tables including Channel (DimChannel), Date (DimDate), Product (DimProduct) and Product Sub-Category (DimProductSubCategory). In fact, the data source pre-defined these relations so that when I imported the data into my PowerPivot model in Excel, these relationships appeared by default as shown in the following figure.

Visually, I could switch to the Diagram view of the data model to see these relationships represented by solid lines connecting these five tables as shown below.

However, suppose I have additional information in my FactSales table. The DateKey field that I have used in the past identifies the sale date for each of the sales records. In the real world, there may be additional dates associated with each sale. For example, it is not hard to imagine that each sale would also have a Delivery Date and an Invoice Due Date. Now I might ask, does it make sense to report on sales based on the sale date or does it make more sense to report on sales based on the invoice due date or even the date of payment. Well, you might say, ‘That depends on who is asking the question.’ Very true. My Marketing/Sales manager might want to see sales by the sales date. He or she does not care about when the invoice is paid off. They just need to know if they hit their sales quotas for each month. Therefore, they might need a report that uses the default relationship and looks something like the following:

On the other hand, the Chief Financial Officer is not as concerned about when the sale took place, but when the invoice for the sale is due because only then is the income truly realized for the company. Thus the above report does not meet their needs.

Now suppose that I had a few additional columns, as mentioned earlier, that told me some other dates such as when the items were delivered and/or when the invoice for the sale was due. Let’s further suppose that these columns exist in the FactSales table and might appear like the following figure. 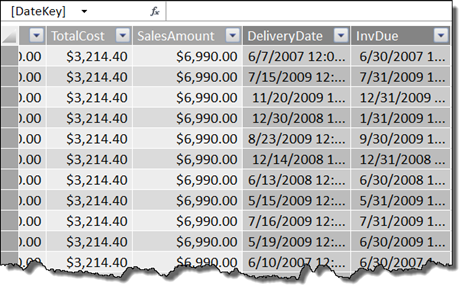 In a similar fashion, I create a third relation between these two tables to connect the invoice due date (InvDue) column in FactSales and the date (Datekey) column in DimDate. For the purposes of this demo, I am going to stop there. However, I could create additional relationships between any other date fields in the FactSales table and the date (DateKey) column in DimDate. Switching to the Diagram view, I could now see something like the following between these two tables.

Notice that there are three lines between FactSales and DimDate. One of these lines is solid and the other two lines are dashed. You can only have one active relationship between any two tables. That active relationship is represented by the solid line. The other two relations are inactive at the moment. These three relationships are collectively called role playing relations and DimDate is a role playing dimension because only one relation at a time can be active from the DimDate dimension. Think of it this way, the date column (DateKey) in DimDate can play one of three different roles. It can either play the part of the sales date, the delivery date, or the Invoice date. However, it can only play one role at a time. Unless all three dates were exactly the same, I have to choose which role I want DateKey in DimDate to play with the FactSales table by selecting one of the relationships.

The initial data import associate the DateKey column in DimDate to the DateKey value in FactSales which represented the date the item was sold. As long as the report requested wants to allocate sales to the sales date, I need to do nothing other than generate the Pivot Table report as shown below.

However, if I now have to generate a report for my CFO, I would have to go into the model and change the role that DateKey in DimDate plays. I might try to simply right click on the dashed line representing the connection between the DateKey in DimDate with the InvDue column in FactSales and select: Mark as Active.

This action would generate the following error message.

Once the original relationship is deactivated, I can go back and activate the new relationship between DateKey and InvDue.

Knowing that only one role (relationship) can be active at a time, I am a little surprised that Microsoft did not automatically deactivate the original relationship when a new one is set active. However, like many things, they did not ask me. Plus they may have had other reasons for not automatically deactivating the current relationship. In any case, after making this change and returning to my pivot table (without making any changes to the pivot table itself), the data automatically updates using the new relationship to show the sum of sales by month of the invoice due date rather than the sales date.

If you examine the sales totals for either the years or individual months, you can quickly see that this role change for the DimDate dimension makes a significant change in the sales numbers reported each month.

That’s all for this week. I hope that now you have a better idea how you can use a single dimension to play different roles. (You could also have added the DimDate table three times to the model, once for each date column in FactSales so that each instance of the DimDate table could have a single relationship to FactSales. Then by changing which dimension you select to display in the Pivot Table, you can achieve essentially the same result. This may be easier for the end-user who does not have access to the data model to make the changes listed above. However, your power-users may prefer a simpler model with fewer tables and can change the role played by those dimensions as needed.)

This site uses Akismet to reduce spam. Learn how your comment data is processed.

Topics I talk about